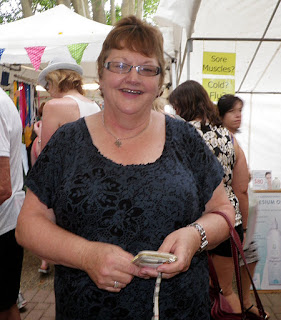 and what tremendous conditions we've had lately. Remember, of course, that your name, the sound of your name, is reacted to in a very particular way by the world, and it's that reaction that you walk into as you evolve.

You don't believe me?

This is Maureen. She arrived at my stall, here in Eumundi, where I sell, "Why shouldn't i call my son Clint?" and she was flummoxed at her name theory.

This is a little convoluted but you'll be okay.
From the book, and the Name Guru app.....

For a start, Maureen read that and exploded with something between pure disgust and raging good humour. I'll explain why in a tic. So, anyway, she went to the boy section to look up George...

George: Plonk goes the dollop of cream on top of the apple pie.

At this piont, Maureen began to laugh hard, bending over and using my table to brace herself against.

"George is the name of my ex-husband," she said. "He was bloody useless!"

I laughed with her.

"How did you know that?" she asked me.

As usual, I shrugged. "I don't Maureen. I repeat the name and these images about the personality come into my head. I don't know where from."

'Well bugger me," she said. 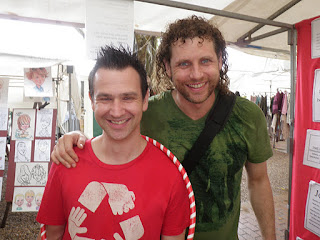 Not long after Maureen, these likely lads turned up. David, on the left, and Paul. Looks like true love to me.
And yes, my name is David, also. As a little side exercise, if you're bored, have a try and writing your own name theory......anyway

David: The heavy D's at both ends weigh his name down like the legs of a Bass Strait oil platform, and to this end he may be too deep and sensitive for his own good. However, the "V" in the middle provides a powerful launchpad for virtually anything. We wish him well.

Paul: Paul is an interesting persona. A polite man whose depths sometimes take years to see, he's intelligent enough, normal enough and he almost never falls ill. To maintain a perfect balance in his life, however, he must perform some semi-evil act every six months. Paul is a deceptively tall name and without some kind of dirty little secret to keep him real, he'd just topple over.

David says to me, "Should I keep the hoola-hoop in the photo?"
Paul and I laughed at him immediately.
'You must," I told him. 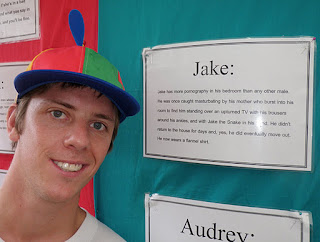 Now, one of my bloody idols. Jake. How many people have I met at the markets? I don't know - thousands. At least several thousand, probably. And the people I love the most are those whose 'name theories' are potentially challenging, for they're the ones who see the reason I wrote this book, now the Name Guru app.
All of us need to laugh at ourselves. No question.

And in a separate story, that's about the coolest hat that's come past my stall. You're a legend Jake. Thanks for stopping by and I hope "Why shouldn't i call my son Clint?" is treating you well. 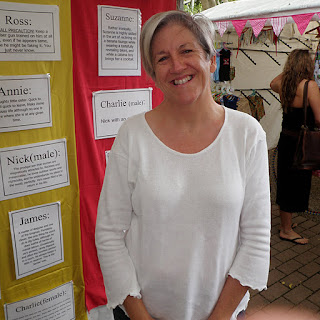 Now, this girl's name is Gai Lemon. Yes, she's gay. She discovered that very early, but only came out when she was 28. (Thank you society for being such a stick in the bloody mud!)
She's a celebrant these days. At least, I'm pretty sure she is (you are, gai!!). I lost your card!

Gai: Gai is not all that feminie and she is quite bare-knuckled about it all but if you want to get something done in a hurry, and done properly, then you could do a lot worse than getting her on board.

She was a bloody gem, and yes, she laughed hard on reading her name theory.

What a weird and wonderful life it is, huh?
www.nameguruapp.com is where you can find the app, for iphones/Android. Or you can get the book from me, or from Amazon.

As is it, I'll be at the Eumundi markets wed and sat until my life ends. I'll see you there.....

Posted by David Hocking at 4:27 PM No comments: