"Most of us would know how your mind can drift when you're out surfing. A nearby disturbance in the water, and you unfortunately start to picture the worst. You may envisage getting away by the skin on its teeth, or imagine being chomped. I would be surprised however, if any of us actually contemplated what it would be like after you have been eaten alive.

David Hocking did, and wrote a novel about just that." 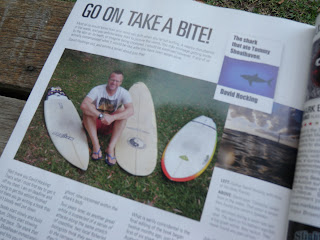 A 16-year-old boy is killed by a massive great white shark, one perfect blue Cottesloe morning, in Perth, WA.

What begins is an oceanic odyssey for Tommy's ghost, now cocooned within the shark's body. Until the boy begins to stir within the animal.

And then everything changes- for Tommy, for the shark, and for a select few people back on land, in Perth, who are unwillingly dragged into the situation...


"It's weird to talk about for me, this book. My grandparents took me to see Jaws when I was about 8-years-old, at my insistence, I might add. But it affected me, like it affected an entire generation.

My obsession with sharks and the ocean exploded that night, which, I'm sure, is why I ended up studying marine biology. As an adult I got to see my fair share of sharks I think - some big Tigers on a dive trip to a reef out in the Timor Sea, I'll never forget. Bigger than cars some of them, my god, but I've never seen a Great White.

It's funny. I surf now, and still think about sharks as much as I ever did. Maths gives me piece of mind these days. Yes, shark attacks happen but realistically the odds are astronomically absurd. I went for my first horse ride last week and I'm sure way more people die in horse riding accidents in a month than the number of people killed by sharks in two years.

The creepy thing about 'Tommy' is that when I began the re-write in 2010/11, that was when the first of all those white pointer deaths in WA started happening. I was knee-deep in the editing phase, which, as most writers know, turns you into this obsessed-writing-zombie, and contemplating all these great white interactions in my book while here in the real world, in places I used to swim regularly, people were being killed and eaten in ways that I was trying to describe. It was just insane. I'll never forget it, actually.

Indeed, there are some connections between me and a couple of the victims that I didn't realise till way later. Just crazy.

The sequel is about to begin. As I suggest in the book, I honestly don't believe that when you die that's it. I'm not even sure reincarnation exists, I mean, who can be? But I'm sure something happens next, and so I just wonder how close The Shark That Ate Tommy Shoalhaven is to the truth. I guess we'll all find out one day, eh?


I've copped a fair bit of friendly abuse over the years, from people who are angry at how the first book ended, but as I say, death is just the beginning. In the sequel, we'll get to meet everyone again because Tommy's mission actually isn't over...... sort of. It's complicated!"