Late Ocotber 2011 and welcome to another week from the Eumundi markets, with the news that 'Why shouldn't I call my son Clint?' is approaching sales of 6000 copies in Australia. True, Bryce Courtney and that Harry Potter chick aren't in danger of being overtaken just yet, but I would attest that 'Clint' has elicited more guttural laughter. Probably ruffled a few more feathers too, but that's another story.

Col' and China, pictured below, loved it. Col on the bottom, kind of shook his head at his description though..... 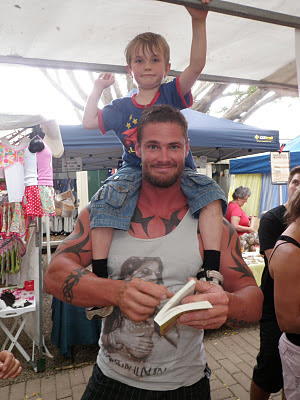 Col: The tall and slightly out of shape middle-aged bouncer, who works at the pub every Sunday afternoon. He'll kick people out if he has to, and he can handle himself, but overall all he wants to do is see that the young kiddies have a good time without hurting either themselves or anyone else. His home life is actually very sedate.

Col read his name theory and looked down at his own arms (evidently chiselled from marble) in surprise, but tall. The pic doesnt do him justice but he's at least 6 and a half feet tall. I shook his hand and, in the words of Jack Black, it was like grabbing a bunch of bananas. China will make the list next edition.... 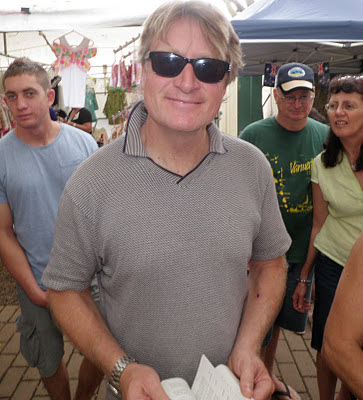 Now, what about this bloke, pictured left? What name would you give this creature, do you reckon? I guessed at Richard, James, perhaps even a Tristan, but no....

Jimmy: Like any decent crap you're trying to have, Jimmy is bare-boned, rude, proud, occasionally very funny and generally wonderful to experience. (Just be careful of the cleanup.)
And even though his spelling was Jimmi. ie- Jimmi Hendrix. So i'll deal with 'Jimmi' in the next edition. He was Irish - funny guy. Thankyou Jimmy.... 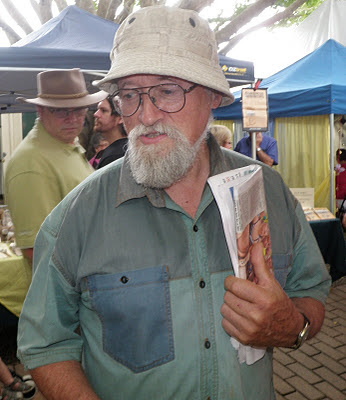 What about this bloke on the right?....

He's the first specimen of this name I've ever actually met, anywhere in the world, apart from a dude in Livorno, Italy, who I met years ago....
Guido: Guido is one twisted mother f--cker.

He looked more like a Reginald to me, perhaps an Edward. Anyway, there you go.

Now, last but not least, this dude was walking passed the 'Why shouldn't I call my son Clint?' stall and I yelled at him to stop and say g'day. Seldom do you see a person with such style.

Rohan: Patient and contained, Rohan is the sort of bloke who makes an excellent professional photographer. 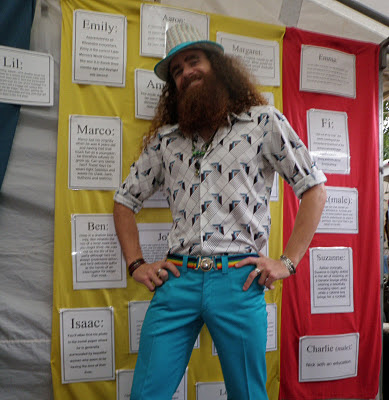 ..yeah, not sure I got it exactly right on this occasion Rohan. Perhaps is the book and the Name Guru app suggested that you belonged in front of the camera, I might have been more accurate?

Anyway, such is life, here on Planet Earth.

Just a reminder that the full list is now an app for iphone/Android devices, and comes with a romantic compatability function. (www.nameguruapp.com)

Books can be got from me at www.thenametheory.com

As of next week the first modern Shark ghost story will begin its serialization, here at daysofhock. The original title was 'The Arc of Tommy Shoalhaven'. It will be hereby be known as, "The shark that ate Tommy Shoalhaven."

I'll see you on the water.

Posted by David Hocking at 7:53 PM No comments: 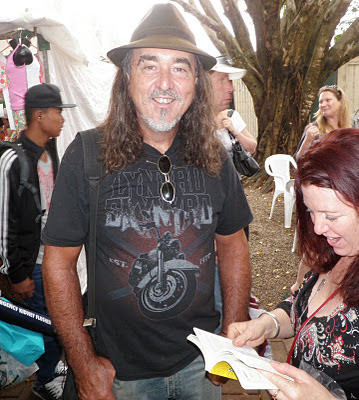 Greetings sportsfans, and welcome to another edition of the wide world of "Why shouldn't I call my son Clint?" (and the Name Guru app) here at the Eumundi markets.

This fellow on the left is Gary, and we'll get to him in a sec, but he was especially impressed with his daughters' name theory.

Phoebe: Her father is certifiably insane, which explains why Phoebe is as complicated as she is. So it's not her fault, classically speaking, but Phoebe is pretty cool. Keep an eye on her if you like, but she'll be fine.

He read that and started nodding and gesticulating hard. "That's exactly right," he said. "I AM insane!"

Evidently the description of Phoebe was on the money. He wasn't so sure that 'Gary' suited him now.

Gary: See Garry..... (There's a red wine stain on the lounge room carpet that he left one night after he turned up drunk and unannounced.).... although this one drinks more.

In actual fact Gary seems to be connected to the universe in quite a magnificent way, which means he either really is insane, or he's got it completely sussed. I suspect the latter...

Later, the beautiful Sydney chicks turned up in their Sydney hats. From left, Jenny, Ashley and Jude seemed to enjoy themselves. 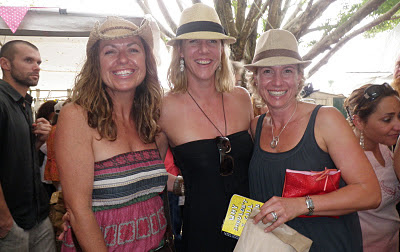 Jenny: The Community and family stalwart who is hard-working and very polite.

Personally I think that's bullshit - Jenny likes running across grassy meadows naked while trying to scoll from a Corona stubby. And Ashley...

Ashley: Contorted up insider herself, Ashley is a pretty girl who worries too much about trivial things.


....yeah, maybe the Name Guru app (and the book) got it wrong. How can someone so happy be so twisted up??

Finally, Jude, without doubt the most laid-back of the trio and that kind of makes sense....

Jude: Jude works at the pub where she pulls a mean beer. Laughs a lot. Fights hard. 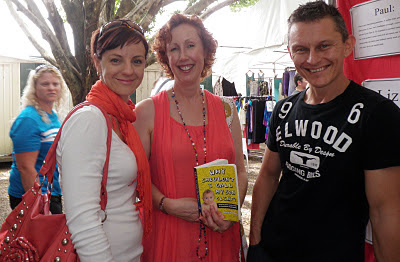 Finally, Tammy, Deidre and Phil arrived looking like they'd just stepped off the plane. Tammy liked her name theory initially and then she balked.....

Tammy: The name of a beautiful soft blanket that you wrap around yourself on a cold night before sloughing on the couch for a bit of TV. The only thing you have to watch out for is a single large hole about as big as a basketball and depending on there it is located, you may be forced to wrestle with a chilly breeze on a part of your body that will make it difficult to relax for very long. So, can you see the hole?
Yeah. Roger that, I reckon.

Which I like, because what more can you ask for, seriously. Poor Phil has a few issues, however......Phil rhymes with dill, after all.

I guess it's better than Phillip. (Phillip: The pompous boring poo-poo man.)

In any case, I'm bloody-well excited to see who turns up next week. As usual, all these names and over 2000 more are on the Name Guru app, Android-ready as well as iphone.

By the way, there is another youtube video out....I've been in love with 'Noreen' since her name theory popped into my head years ago, and it was about time the world got to meet her too.....

If anyone one out there wants a signed copy of "Why shouldn't I call my son Clint?" go to , www.thenametheory.com. And if you want the app, with the added bonus of a compatibility function, check out www.nameguruapp.com

Anyway, life is a dream based upon this second and this second only, so do whatever you want, but BE WONDERFUL....and Gary would agree.

Hocking here, welcoming you back to the "Why shouldn't I call my son Clint?" arena at the Eumundi markets, where it seems the season has just ended. True, Geelong won the flag but who cares, when finally my search for a genuine Carlton cap has ceased. Before I continue, for those not in the know the Name Guru app is now out on Android!
https://market.android.com/details?id=com.nameguruapp.app&feature=search_result

Reading the paper quielty at my stall yesterday, a young man arrived in front of me wearing a Cartlon-member cap. My eyes lit up. I looked at the young man smiling back at me, to his father, then back to the young fellow.
"Mate! How about I give you a free book for that cap!" I asked with bated breath. "Whattaya' reckon?"
The young man grinned hard and looked to his dad. His father smiled back and shrugged. "...Yeah, go on. You've got three more at home, haven't you?"
The boy's smile grew wider than his face. He looked back to me and took the cap off. "Okay," he said.
Never before have I been so excited to hand over a book, for my long search was over.
"What's your name?" I asked him.
"Jack," he said.

(From the book and the Name Guru app....... Jack: As one of life's great experiences, Jack is the name given to the phenomenon of a parcel arriving unexpectedly in the mail from a good friend. Outstanding.)

I breathed a sigh of relief - if it had been Jake or Joel I might have been in trouble - and in two shakes I'd signed young Jack a copy. 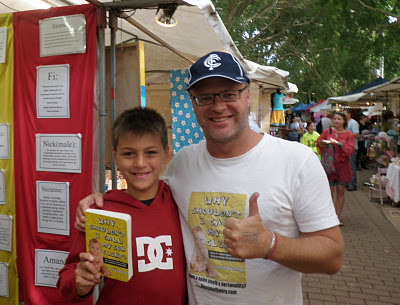 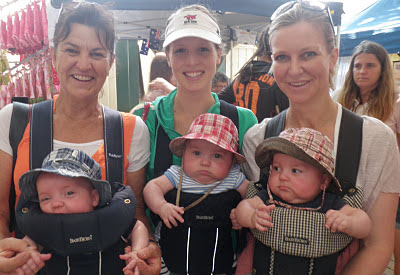 Last Saturday, a different spectacle arrived at my stall. The first triplets to present themselves at "Why shouldn't I call my son Clint?" Back row from left to right; Claire, Carly and Liza. Front row: Another Jack, Oscar, Archie.

Man, I meet some Archies. He doesn't exist in the book, but he's alive and well in the Name Guru app. ..

(Archie: Pure as the driven snow.)

I probably should've said something like, Pure as the driven snow when he's in front of his parents. 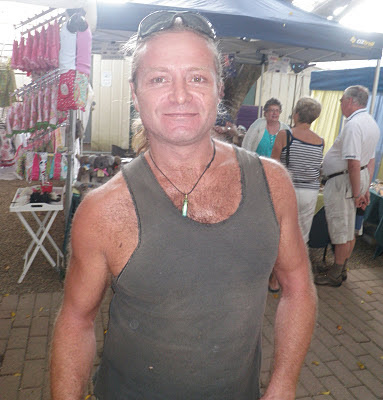 as prepared to bet money on the fact that his name was Mick.


"...nah," he said, as cocky as all crap. "You'll never guess it."
"Alright, I give up. What's your name?" I asked.
"Vlad."
Who currently doesnt exist anywhere, yet.
Thankyou Vlad, thankyou triplets, thankyou mum, and thankyou to young Carlton-Jack.

In fact, if you're out there cap'n, a few years back I visited a meteor crater in North Eatern Western Australia called Wolf Creek Crater. In the early morning the echo has to be experienced to be believed.....check out this youtube vid. of what i yelled out, and tell your dad i'm sorry about the little bit of bad language!!

And I love the hat brother!!!

Posted by David Hocking at 9:19 PM No comments: