Does your name influence your personality? 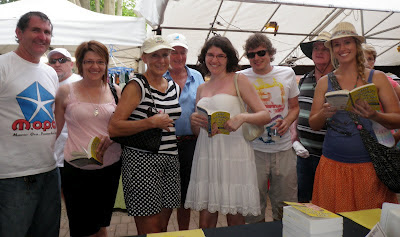 Greetings sportsfans,
It's mid February here in sunny Noosa and "Why shouldn't i call my son Clint?" rolls along. A lot of Clints have visited the Eumundi markets lately, and I'm gratified and delighted, as ever, that not a few of them took with them copies of the book. You cant beat a Clint with a sense of humour, I reckon.

Several people have skipped the book entirely and gone straight to the 'Nam Guru' app, available for all Apple and Androids. The romantic compatibility function is the thing they love the most, so I hear. But I digress.....

Some of the recent visitors to the stall at the Eumundi markets....above left to right we have, John(the boulder out near the edge of town), Christine(CEO/author), Pamela(picked up a nice Mercedes from her divorce), Peter(goodluck with that, Pete!), Shirley(lives for bubble baths), James(never done a hard days work in his life!!) and Paula(beautiful but oh so close to catastrophe!) .

A happy bunch - thank you! 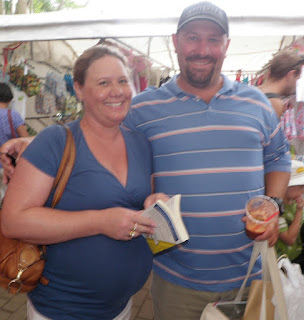 Now, Justin and Monique arrived (left). According to the book and the Name Guru app, Justin is the name given to what happens to a bowl of cereal if left too long. eg- it's a soggy disaster. Blow me down with a feather when he told me that he especially LOVES SOGGY CEREAL!! Justin: you're a legend. Monique was equally delighted.

Monique: The living embodiment of a chook raffle.

As I told them, I never wrote the book as a baby name book but cripes, pregnant people love it. For the record, in the 'Name Guru' app compatibility stakes, Justin and Monique record the following score.....

Frequency of sexual relations(according to the app): Every 45 minutes. tantric, usually.

Never a dull moment, as i say. 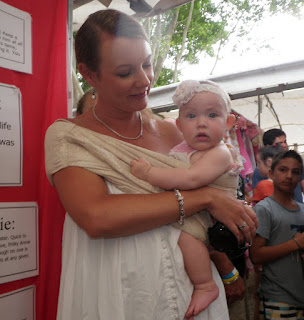 Now, Louise and Scarlett.....look at these two, will you. Scarlett is the daughter, and according to both book and app, she will turn into a vixen from head to tail! She'll be a passionate girl in both love and hate and will delight in wearing bright colours in her predominantly red hair.

And check out the young dude on the right watching the whole thing. No idea who he is, but he adds to photo perfectly...

Then of course, we had the chicks arrive!! 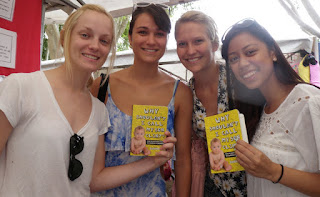 Left to right, Caitlin (the train crash, Samara (the tribal bonfire in PNG), Carol (the gentle and good-natured Loggerhead turtle) and Victoria (the proud horse.)

Indeed, Victoria, I interviewed a horse once for the Name Guru app.......http://www.youtube.com/watch?v=e7MAlD9AS80


Thank you girls.......and you look nothing like the 'Victoria' in the interview, Victoria! 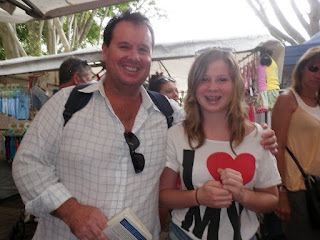 Later, the father and daughter team of Warren and Holly showed up. Dad was abit flummoxed at the description of Warren in the book. Indeed, he began to turn red in the face with either excitment or anger - I wasn't sure...

Warren: A variety of ferret, Warren is pure white in colour when he's clean but, generally, he's a dull shitty brown, he smells odd and he bites.

Holly, on the other hand, was all smiles because, basically, Holly is skilled, loved and loving, and she can do anything that she bloody well likes! Amen Holly! Hard to believe he's your dad!! (...just kidding!)

thank you, you two. I hope you're enjoying the book!

Last but not least, check out this rabble, will you? From left to right......Jack(the phenomenon of a parcel arriving in the post from a good friend- although modern school teachers disagree, Jack), Jacob(a possible Baptist minister), Michael (catholic school boy, political fundraiser, engineer, etc, etc), Ebony (back) - very energetic and possible parana in her next reincarnation), Alexandra ("Where's my pony, mother? I want my pony??!!!"), Kate (ahh....the glorious breathe you take before diving into a perfect blue sea), Rebecca (the gifted intellectual who might be a racehorse wearing blinkers and finally, Emily (the table manners world champion!). somehow i doubt that, Emily! 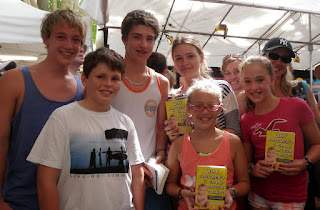 Until next time at the markets, good luck and god bless.

And all sunshine coast residents can catch me Monday afternoons on Noosa Community, 101.3FM from 4-6pm.

Posted by David Hocking at 6:14 PM No comments: